I used a Boss BF-2 flanger pedal for years.  It’s a great pedal, especially if you can find one of the older Japanese-made models.  But it could never really do that over-the-top sound from Van Halen’s Unchained.  Eddie used an older MXR flanger pedal on that classic riff, and Dunlop/MXR now have an “EVH”-branded flanger that can do that sound at the push of a button: EVH Flanger Pedal

This is one heck of a flanger pedal. It’s rock solid, heavy, and has a heavy duty full bypass footswitch.  It also requires a lot of power, either using two 9-volt batteries or the included 18v wall wart.

If you want the Van Halen Unchained sound, you can press a special EVH button to bypass the settings and go straight to the classic TIE-fighter swoosh effect.  For the best results, you’ll want this pedal near the front of your signal chain, with a high-output humbucker on the guitar and distortion cranked on the amp.

But the pedal can do a lot more than just the Van Halen effect.  The four tuning knobs let this pedal make tons of great sounds.  In fact, I was in search of a good Leslie or Rotoverb pedal to get that early Charlie Hunter guitar/organ sound, when I realized that I could get an excellent version of that effect just by tuning the EVH flanger.  Set the following knobs to get a decent H&K Rotosphere sound:

The EVH Flanger Pedal is a bit pricey at around $190, but it is easily the most versatile flanger I’ve owned. It’s one of my favorite pedals. 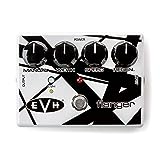